Extracts from the Alsenborn Church Protocol.

The original documents, of which the following are copies, were in the possession of Andrew Shriver, Sr., of Conewago, at the time of his death. 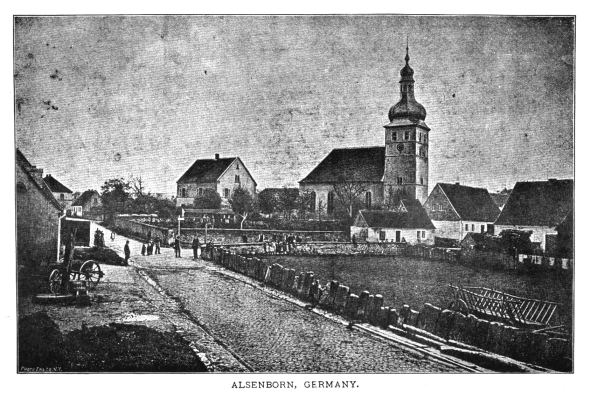 photo from inside front cover of the 1888 Green Book

“Anno 1698, on the 14th of August, John Young, of Frankelbach, and single state, was, after being regularly proclaimed, joined in wedlock with Anna Margareta, the legitimate daughter of Hans Theobold Hess, of this place.

“The above-named Anna Margareta was baptized in the church of this place on the 22nd of October, 1674; her father was Theobold Hess, and her mother Margareta, citizens and wedded persons of this place. During her marriage with her before-mentioned husband she had the following children who are yet living:

“1699, October 9th, was baptized Hans Theobold; parents, John Young and Anna Margareta, wedded persons of this place; sponsors, Halls Theobold Hess, citizen and inhabitant of this place, and Anna, the legitimate daughter of Sebastian Hess, of this place.

“After the death of the father of these two children, their mother again entered into wedlock, as follows: 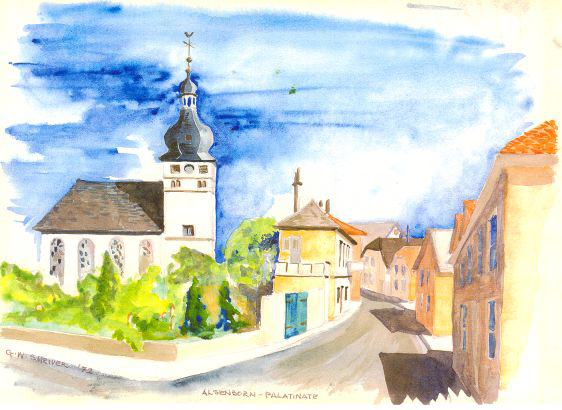 Watercolor of the Alsenborn church, painted in 1972 by, and reproduced with the permission of, Glenn W. Shriver

“Anno 1706, month of August, Andrew Schreiber, legitimate son of Jost Schreiber, of this place, was, after being regularly proclaimed, joined in wedlock with Anna Margareta, legitimate widow of the late John Young, who was a citizen of this place.    [10]

“Of the before-mentioned Schreiber’s birth the following is found in the protocol:

“1673, the 7th day of September, was baptized Andrew, whose parents were Jost Schreiber, citizen of this place, and Anna, his wife. Sponsors, Andrew Fisher and his wife. This Schreiber begat during the marriage with his wife the following children:

“Anno, 1712, 6th of September, was baptized Andrew; parents, Andrew Schreiber, of this place, and his wife, Anna Margareta; sponsors, Andrew Schram, and Anna Barbara, wife of Nicholas Speck, all citizens of this place.

“That the above was by me faithfully extracted and copied, I attest by annexing my seal, and signature, Alsenborn, May 13th, 1721, being in the Electorate Palatine, Oberamt Lautern.

[SEAL]   JOHN MUELLER,
Preacher of the Word of God in the Reformed
Congregation, Alsenborn.”

That the bearer of (or person showing) this, Andrew Schreiber, citizen and inhabitant of this place, and his wife, Anna Margareta, whom he has with him, confess of themselves to be conformable to the Word of God, of the Reformed Church, and have until now, assiduously observed the outward duties of Christianity in attending our public worship, receiving the Holy Sacrament, and otherwise, as far as is known, have been irreproachable in their conduct, I attest. And whereas the said man and wife and their children, after having borne adversities, are about to turn their backs upon their country,   [11]   and to go, (God knows where), into a strange country, I would therefore recommend them to a willing reception by the preachers and elders of the said Reformed Church wherever they may show this. Alsenborn, Oberamt Lautern, in the Electorate Palatine.