During the Civil War era, another set of Shriver brothers — Andrew K. and William — operated Union Mills. Andrew sided with the Union, although he owned slaves. William, who did not own slaves, supported the Confederacy. The two brothers lived on either side of the Littlestown Pike — divided not just by the road, but by the war itself. Their sons fought on opposite sides during the war.

The prelude to the Battle of Gettysburg, 1863

Union Mills Homestead is rich in Civil War history. Thousands of Confederate and Union soldiers passed through the important crossroads at Union Mills in the days prior to Gettysburg. Both armies camped at Union Mills, one on June 29, the other on June 30.

Significant events occurring at the property included the arrival of and encampment of Confederate Cavalry forces commanded by Maj. Gen. J.E.B. Stuart late in the night of June 29, 1863, just prior to the Battle of Gettysburg. Stuart’s cavalrymen were fed flapjacks out of the kitchen at the back of the Shriver family’s home. On the morning of June 30, 1863, Stuart’s Cavalry left Union Mills after Stuart and his senior officers were entertained by the William Shriver family at breakfast. Just a few hours after the Confederates departed, Union forces from the Union Army’s Fifth Corps arrived at Union Mills. Brig. Gen. James Barnes, First Division Commander, made the Shriver family homestead his headquarters that evening.

The Battle of Westminster: “Corbit’s Charge”

On the afternoon of June 29, 1863, a fierce cavalry battle erupted on the streets of nearby Westminster, Maryland. A column of thousands of Confederate Cavalry under the command of Maj. Gen. J.E.B. Stuart, accompanied by two batteries of horse artillery, had splashed across the Potomac River the day before, in an attempt to circle around the Union Army. As General Robert E. Lee and the rest of the Confederate Army marched across Western Maryland into Pennsylvania, Stuart and his Confederate Cavalry rode into Westminster on the Washington Road. 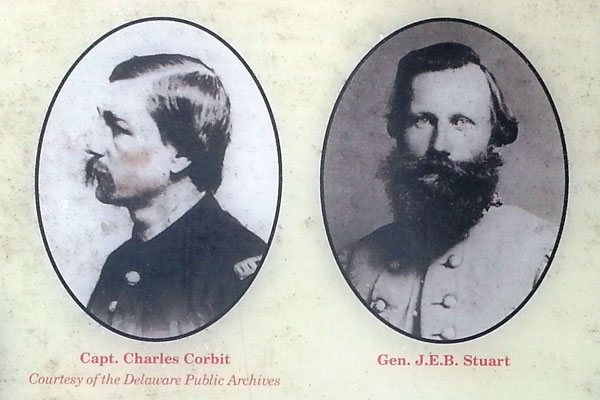 In Westminster, the Confederates encountered a stubborn resistance from 108 troopers from the 1st Delaware Cavalry, under the command of Capt. Charles Corbit. Corbit and his men fought with “an almost suicidal bravery,” initially pushing back the rebel column. The battle surged back and forth, but Corbit’s Cavalrymen were eventually overwhelmed by the much larger number of Confederates. Corbit was captured and his unit sustained over 50% casualties (killed, wounded, or captured). The Battle of Westminster, also known as Corbit’s Charge, was one factor in Stuart’s delayed arrival at Lee’s Headquarters late on July 2, 1863, after the Battle of Gettysburg was joined, perhaps altering the outcome of what was to become the pivotal battle of the Civil War.

In the aftermath of the fighting in Westminster, the weary Confederate Cavalry rode north to Union Mills, located at an important crossroads between Westminster and Gettysburg. In Union Mills, the Confederates rested for the night along the Big Pipe Creek, while their horses grazed in the lush fields nearby. That night, Brig. Gen. Fitzhugh Lee slept under an apple tree in A.K. Shriver’s orchard, as the cavalrymen were fed from the home’s kitchen. The next morning, June 30, 1863, Stuart and his officers were treated to as fine a meal as the southern-sympathizing William Shriver family could muster.  Later in the morning, Stuart and his Cavalry departed Union Mills, led to Hanover, Pennsylvania by William Shriver’s son, T. Herbert.

Within a matter of hours, another column of soldiers arrived in Union Mills, this time the Union V Corps, under the command of Maj. Gen. George Sykes. Brig. Gen. James Barnes, a division commander, made the A.K. Shriver Homestead his headquarters, and slept in the old Homestead that night. Among the units that camped in the area was the 20th Maine, under Colonel Joshua Lawrence Chamberlain. In just a few days, Chamberlain and his unit would achieve fame on the slopes of Little Round Top. Early on July 1, 1863, the Union Army broke camp and marched away from Union Mills to their destiny on the fields of Gettysburg.

Maryland’s Civil War Trails follows battles of the Civil War that were fought on Maryland’s soil. A free app is available to download.

Join us in July for the Civil War Encampment & Living History

Join us at Union Mills to experience living history that commemorates the events of 1863, in the wake of the Second Invasion of the North. Walk in the footsteps of the citizens of Carroll County, Maryland, who were divided in their loyalties, and the Union and Confederate soldiers who camped along Big Pipe Creek at Union Mills in the days prior to Gettysburg.

//  LEARN MORE ABOUT THE CIVIL WAR ENCAMPMENT AT UNION MILLS