Over a century ago, Union Mills was one of the first places in the U.S. to participate in the Rural Free Delivery (RFD) experiment established by the U.S. Post Office. This site provides some information about Union Mills’ role in the history of RFD.

It was a cool, brisk autumn morning when the Western Maryland mail train pulled into the Westminster Station in this picturesque Carroll County community. The day was October 6, 1896. Four men stood waiting at the station. It was their first day on a new job as Maryland’s first Rural Free Delivery mail carriers. 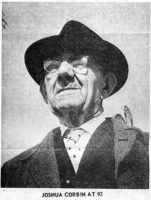 They were Joshua N. Corbin, David R. Geiman, Eugene Tubbins, and Mark Yingling. Only one of these men is alive today — Joshua Corbin.

After the mail was taken off the train it was loaded into a wagon and hauled to the Westminster Post Office a block away, where it was sorted by the carriers. Anxiously awaiting to start his new job, Mr. Corbin hurried out the post office door and began his route before the others an thus, became the first Rural Free Delivery mail carrier in Maryland.

According to early postal records, Congress appropriated funds for a Rural Free Delivery system in the United States in 1896, and the Post Office Department selected 44 localities in 29 states as experimental “guinea pigs.” The first three were in West Virginia, established on October 1, 1896, but only a few days later a second group was set up. This group included two localities in Indiana, four in Ohio, and one each in Missouri and Maryland. Carroll County was designated as the scene of the Maryland try-out and four routes were started from Westminster on October 6, 1896.

Mr. Corbin explains that the Carroll County experiment was one of the few that really worked out. And just three years later, R.F.D was official. On December 20, 1899, the United States Post Office Department graced Car- [sic] having the first Rural Free Delivery Service in the United States.

Mr. Corbin’s route, which averaged about 30 pieces of mail per day, covered the southern end of Carroll County, with Westminster as the central distributing and starting point. He made his rounds on a small wagon, pulled by his horse “Harry.”

Mr. Corbin was not required to take a Civil Service Exam at that time. He received $25 per month and he worked 27 days a month.

“At first,” Mr. Corbin reported, “the farmers didn’t like the service too much. They thought they would have to pay for it and getting free mail from the government didn’t make much sense at all. But after some time had passed, they were very pleased with it. Of course, they didn’t have the type of mailboxes we have nowadays, so you found anything from tea pots to cigar boxes to serve as a mail holder.”

Mr. Corbin’s recalls one snowy March that it took him a whole week to cover his 34-mile route. During this week he rode his horse bare-back, but still couldn’t get through the high dritfts. Mr. Corbin paid about $9 per month to feed and house his horse and when he decided to get married he found himself paying $15 a month rent. This left him $1 to live on. So after three and half years as Carroll County’s first R.F.D. mail carrier, and perhaps one of the first in the United States, he quit and went on to seek a better paying job.

He found one, too. For many years after he was a Tollgate collector on the Baltimore Pike, a turnpike which ran from Baltimore to Westminster. Later he owned and operated a grocery and liquor store in Westminster. The liquor establishment was said to have the longest bar in the county and the best liquor in the state of Maryland. Business was good until prohibition put him out. During the 1930’s, he was a chauffeur for a wealthy Baltimore family and made several trips to the West Coast and back.

For the past 30 years Mr. Corbin has been in retirement. Still healthy and active at 92, he spends most of his time watching television and talking to neighbors at his home in north-west Baltimore.