A tannery was one of the original supporting trades that formed part of the business enterprise founded by Andrew and David Shriver, Jr. in 1797. The tannery was where animal hides were “tanned” and turned into leather, a vital product for shoes, clothes, saddles, harnesses, and industrial uses. Belts made from leather were used to power machinery and transport grain products in the Shrivers’ automated Grist Mill.

Tanners typically learned the trade by skills passed down to them in an apprenticeship or from working in a family tanning business. The Shriver acquired their experience by both means. The first record of the Shrivers’ involvement in tanning was in 1732 when, after the death of his father, German immigrant Andrew Schreiber learned the trades of tanner and shoemaker as an apprentice. After completion of his apprenticeship, Schreiber married and then operated a tanyard in Conewago, Pennsylvania, east of present-day Littlestown. 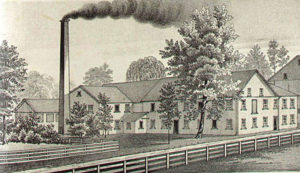 Drawing of the Tannery from 1877 Atlas.

Schreiber’s son, David Shriver, Sr., operated a tannery at his farm along Little Pipe Creek west of Westminster, Maryland where two of his sons, Andrew Shriver and David Shriver, Jr., also learned the tanning trade. Thus, when Union Mills was formed in 1797, the two Shriver brothers brought at least three generations of experience to bear as tanners.

The Shriver Tannery soon became successful as a free-standing business. When Andrew Shriver died in 1847, the property was divided with one son, William Shriver, taking ownership of the Grist Mill and another son, Andrew Keiser Shriver, taking ownership of the Tannery. In time, the A.K. Shriver & Sons Tannery grew to be a large industrial enterprise in its own right.

The Shrivers used a vegetable (oak bark) tanning method to turn animal hides into leather. Tannin from oak bark was extracted from the bark and turned into liquid called a tanning “liquor” in which hides were soaked for long periods. Tannin in the liquor would bind to proteins in the leather, preserving and waterproofing the hides, making leather.

The Shriver Tannery continued through to the last few years of the nineteenth century. After a storm toppled the Tannery’s smokestack in 1902, the family ceased tanning for good, ending five generations of tanning for the Shrivers.

Today, the Tannery Bark Shed remains standing and is used for nineteenth century crafts. The restored Tannery Drying Shed (rebuilt after a fire in 1990) is used for an assembly hall and popular venue for weddings and receptions.