He married Anna Maria Keiser, from near Heidelberg, Germany, in 1733, after arriving in America, and together they established a far-reaching family resulting, among other things, in the Union Mills Homestead mills and farms of two grandsons, Andrew and David, in the year of his death in 1797.

Due to the tenacity of Kenneth Kroh of the Homestead Foundation Board of Governors and student-historian of the Conewago-Littlestown-Silver Run areas, it has been established that after the first Andrew Shriver acquired his farm land, built a domicile and began to prosper, he constructed a brick spring house. David Stacks, historian from the Gettysburg Restoration project, after careful examination, deduced that the spring house, still intact with a beautiful flow of water therefrom, dates to 1750 or earlier. That means that the rugged pioneer, who is said to have acquired his first 100 acres from John Digges of Digges’ Choice by making 100 pairs of shoes for his large retinue of slaves, built well when he constructed his spring house. Also that he picked an excellent location for his farm and home, level and fertile and with excellent water supply, lasting even to this day. His farm remains a working farm, owned by Leroy Basehoar. Andrew and Anna Maria had seven children. Daughters married early farmer-settlers like themselves, named Koontz, Kitzmiller, and Will. One son, David, rose to he was a successful Westminster merchant, banker and lawmaker, and after marrying Rebecca Ferree of Lancaster County, Pennsylvania, became the father of the Andrew and David who built the Union Mills Homestead.

All of this is well known to the Shriver family, of course, but the reference here is prompted by the discovery of the age of the spring house on the property of the very first of the Shrivers (then spelled Schreiber and Schreiwer). We are indebted to the perseverance of Ken Kroh for fixing the date of the spring to before 1750. 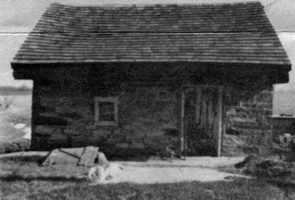 This spring house on the original Shriver Farm at Conewago, near Littlestown, has been dated to 1750 or earlier by architectural experts. If correct, it may well be one of the oldest structures still standing from the early 18th Century in all of “Digges Choice.” Andrew Shriver paid John Digges with 100 pairs of slave shoes for his first 100 acres.

Father's Day is June 20th! Our gift shop has great gifts for Dad.