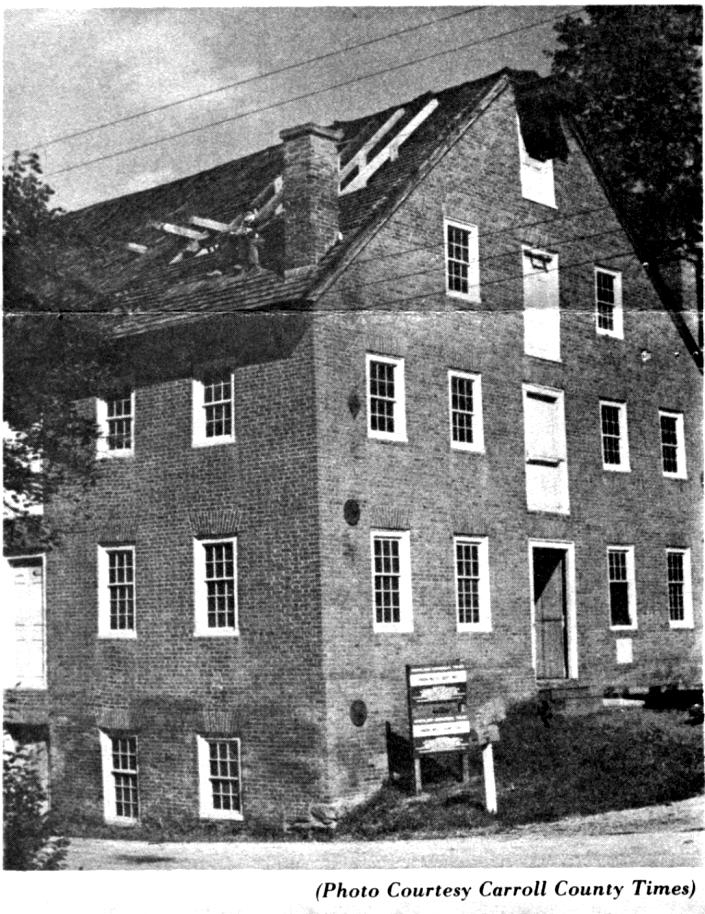 The Grist Mill, being restored by the Carroll County Commissioners, gets a new shake roof. The pitch of the roof required considerable skill and agility on the part of the workers to apply the shingles.

High hopes are held by the Carroll County Tourist Advisory Council for the restored Grist Mill at Union Mills as a future tourist attraction. As pictured on the next page, the Mill is getting a new roof, and eventually the County Commissioners expect the Mill to be fully restored and in operation for the benefit of visitors.

Brickwork and other physical restoration was completed on the outside last year, although some alteration may be necessary for installation of the water wheel. Whether this all can be accomplished by next Summer remains to be seen, but Max Bair, acting for the Commissioners, has been assembling mill machinery similar to what was in operation until the 1940’s. The Mill itself is as old as the Homestead, early records show.

The value of mills as tourist attractions cannot be underestimated. Visitors flock to the score or so still in use in Pennsylvania and Maryland. Some are still putting out flour as souvenir items. Others, such as that in Colonial Valley, Menges Mills, Pa., are featuring up-and-down lumber saws on the same general site.

There even is a publication “Old Mill News” produced quarterly by the Society for the Preservation of Old Mills, at Wiscasset, Maine. Among other interesting items in a recent issue was a For Sale advertisement offering of a water-powered grist, sawmill and cider mill, with grounds and two bedroom home on the Ohio Canel, for a mere $115,000.

The same magazine reprinted what it described as the first newspaper ad published in America, an ad for a fulling mill in the Boston News-Letter, May 1704.

AT Oysterbay, on Long Island in the Province of N. York There is a very good Fulling-Mill, to be Let or Sold, as also a Plantation, having on it a large new Brick house, and another good house by it for a Kitchen & workhouse, with a Barn, Stable & a young Orchard and 20 Acres clear Land. The Mill is to be Let with or without the Plantation; Enquire of Mr. William Bradford Printer in N.York and know further.