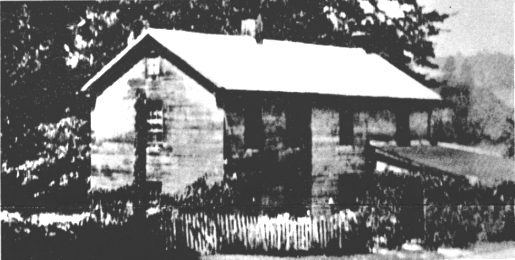 Having a home and a mill dating from 1797 is not unique in our part of the country. What makes the Union Mills Homestead unique is the fact that both the house and the mill as well as the original “necessary”, the tannery, the drying shed and the miller’s house still stand today. To have all these original structures standing almost two hundred years later, is a wonderful historical monument. If you have visited lately, you know that the house and the mill and the necessary are in great shape. The miller’s house is barely standing; yet in the interest of historic preservation, the Foundation has embarked on the restoration of this circa 1820’s building. It is the next step in restoration to make the buildings available to the public who come to see this historic site. In the last Newsletter we described the grants that have been received thus far from preservation organizations. At that time, we put out a call for donations from the membership. To date we have received $4647.25 from members. This has been a generous amount, but we still need more help financially. Please think of the Miller’s House so that future generations will have this building to enjoy along with the Homestead and the Mill. Melvin Arbaugh, historical architect is drawing up the restoration plans.

Miller’s House Restoration — Next Big Project to be Tackled

Evelyn Gunther drew this conception of the Miller’s House after restoration.

With the Mill safely restored and preserved for future generations, work must now begin on restoration of the 1830’s Miller’s House. At one time it seemed that this valuable part of the Homestead history would be torn down, but we will be able to save it because of grants already received from the National Trust for Historic Preservation, the Society for the Preservation of Maryland Antiquities, and the Maryland Historical Trust. An estimated $25,000 more is still needed to bring the house back to life. It is planned to use the structure as an orientation and information center, as well as moving the gift shop there out of its cramped room in the Homestead. The Foundation hopes that you will consider making a contribution to this new project. Your contribution will enable us to move ahead on the restoration all the sooner. Take a look again at the old photo on page one and you will get an idea what the Miller’s House could look like!

The following words are excerpted from a research report Joe Getty did when the Foundation began seeking grant monies.

The Miller’s House is one of only three remaining major outbuildings from the nineteenth century industrial complex at Union Mills. While the Grist Mill and Homestead Museum are well-known as historic sites in the county, the accessory buildings and related industries are what make Union Mills unique from the many other mill properties in the region.

Geoffrey Gyrisco, Executive Director of Historic Ithaca, New York, was hired as the head archaeologist of our four day dig around the Miller’s House. Joe Getty, architectural historian and Union Mills board member, organized the dig. Geoff, Joe and I made up the four day crew. Assisting part of the time were Charles Griebel, IV; James Shriver, III; Frank Shriver; and Chris Erickson, the new miller. On the first day, three archaeologists from the Maryland Historical Trust helped get us started; and, Pat Miller, of the American Association of Museums came to help one day.

We had excellent press coverage, insuring that the public was notified to visit us at work. We had plenty of visitors, asking plenty of questions. Among the people who came to watch was a woman whose father had been a county miller, as well as several retired millers from other mills that had once operated in Carroll County. Edna Schuchart remembered coming with her father when he brought his grain to be ground at the Mill. She told about the picket fence which had been around the Miller’ s House. Her grandfather had made barrels at the Mill and her husband had been a blacksmith in the town of Union Mills. Robert Irvin, also of the town, lived in the Miller’s House in the 1920’s. He went through the structure with Joe, telling about it. Mr. Irvin was also able to give information about the privy, the porch and the summer kitchen (pantry) that had all once been attached to the building. These first hand accounts are valuable data for the accurate restoration of the house.

What did we dig up? Bottle caps, porceIain and redware sherds, oyster shells, animal bones, the stepping stone to one of the front doors, and glass and clay marbles were found. Perhaps the most exciting find, while not the most significant, was a small metal child ‘ s whistle in the shape of a bird.

In the following article, Joe Getty outlines the importance of the dig. Dr. Gyrisco’s findings will be reported in a later Newsletter. The dig was the first phase in the restoration of the Miller’s House which begins in June. The Foundation’s goal is to restore the Miller’s House to the original quality of the building and to adapt the structure for use as a Visitor’s Center — Gift Shop. We still have not met the estimated $100,000 cost of the project and we urge all members to please contribute to the restoration of this notable structure at Union Mills.

The Miller’s House is one of only three remaining major outbuildings from the nineteenth century industrial complex at Union Mills. While the grist mill and homestead museum are well-known as historic sites in the county, the accessory buildings and their related industries make Union Mills unique from many other mill properties in the region.

The Union Mills complex included a blacksmith’s shop, cooper’s shop, and sprawling tannery buildings with a large brick smokestack. Associated with the grist mill was the Miller’s House and a saw and bark mill that was operated by the main waterwheel.

The archaeology project at the Miller’s House was conducted primarily to salvage historical artifacts that otherwise would be lost during rehabilitation of the structure this summer. Over the years, numerous small additions of soil around the building have raised the level of the ground, causing rot in the lower portions of the house. The ground level must be lowered and an underground drainage system installed to protect the house from excess moisture. The archaeological investigation will record the changing uses of the area around the house before such evidence is destroyed by the rehabilitation work.

Data from the archaeology project will also document below-ground evidence that remains from a summer kitchen, porch and privy that once stood at the northeast corner of the Miller’s House. Through careful excavation and analysis of the varied layers of soil and features (such as foundation walls, walks, and post holes), the dimensions and construction materials of this addition can be determined.

Analysis of artifacts and other findings from the archaeological investigation can help us understand better the history of the Union Mills complex and give us necessary information for improving our interpretation and public education programs .

The project was funded through the Foundation’s budget which is supported through our membership and private donations. The Maryland Historical Trust contributed staff archaeologists to assist with the project.