(Image Above: The Tannery Bark Shed and Drying Shed at the Union Mills Homestead)

Most visitors to Union Mills know about its grist mill – it is hard to miss that big brick building when you drive into the site!  As reflected in its name, the enterprise founded in 1797 by Andrew and David Shriver featured a union of two mills, a grist mill and a saw mill. Much less is known about the tannery that once existed at Union Mills. The tannery, where hides were turned into leather, was a focus of a recent study of historic resources at the Union Mills Homestead.

The EAC/A reports were: 1) a Phase 1A Archaeological Assessment and 2) an Abbreviated Historic Resources Study. The most important new information presented is that the Union Mills Homestead is a much more significant historic site than many realized. While Union Mills certainly is old, and has a rare operating grist mill, the Comer Reports confirm that it is an outstanding site with its collection of industrial and residential structures. Founded as what was essentially an early industrial complex, the industries expanded over time as did the family’s home. Union Mills is one of the best preserved examples of such a complex in Maryland.

Among new information in the reports was the description of recently uncovered documentation about the specific number of vats used at Union Mills in 1827 for the tanning of leather. The information developed during the investigation supports the conclusion that the tannery expanded from cottage industry (a small operation supporting the mill) to a growing commercial enterprise over the middle third of the nineteenth century.

Leather is viewed as a luxury item these days, used for high end clothing or other such uses. Back when our nation was founded, however, leather was an important commodity, used for shoes, clothing, animal harnesses and saddles. Another important use for leather in 1797 when Union Mills was founded: for the drive belts that operated machinery in the Shriver Grist Mill. The water-powered mill used leather belts throughout the mill to operate equipment like roller screens (for cleaning wheat) and bolters (that sifted flour). The Shrivers came from a family of tanners, so had plenty of know-how to make the leather needed for the mill they built at Union Mills. 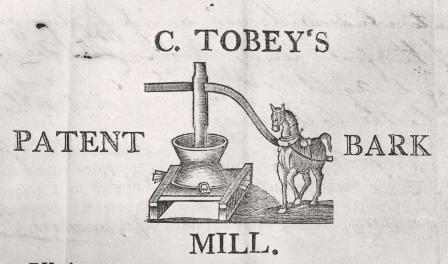 An illustration from a patent license issued to Andrew Shriver in 1813, for a bark mill.

The Shrivers used an oak-bark tanning technique. The hillside surrounding Big Pipe Creek had large stands of oaks that could be used for lumber, cut in the saw mill. But oak bark also was key to tanning. The bark was stripped from the tree trunks then ground up in a bark mill. The powdered bark was then mixed with water in leach vats or “leaches” where tannin the oak was extracted to form a tanning liquor. Carefully prepared animal hides were then soaked in the tanning liquor in tanning vats. Over a period of months the tannin in the liquor would react with the proteins in the hides, preserving and waterproofing the skin, thus making leather.

Leather production grew at Union Mills over time. In 1813, Andrew Shriver purchased the rights to use a horse-powered bark mill, a process that had been patented by Cornelius Tobey in 1807. The EAC/A reports reveal that leather production at Union Mills grew significantly after 1824, with various improvements to the site’s tanning infrastructure. Subsequent improvements included the addition of steam power. The reputation of family’s leather grew, and in 1876 the A.K. Shriver & Sons Tannery received an award at the 1876 Centennial Exhibition in Philadelphia. The tanning operation closed in the 1890s, and a storm blew over the smokestack at the tannery in 1902. Several buildings associated with the tannery were torn down in the twentieth century.

As recommended in the EAC/A reports, investigation is continuing as to underground resources related to the Shriver Tannery. Although several of the tannery buildings were torn down over time, much of the tanning process occurred in vats that were dug into the ground.  Thus, the archaeologists at EAC/A believe that much of the remaining structures from the tanning vats may still exist, hidden beneath the surface. 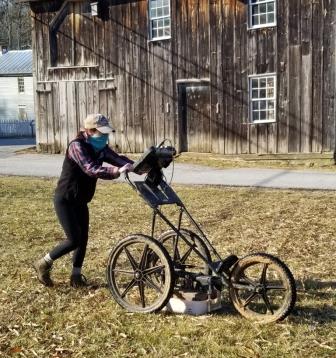 A geophysical specialist conducts a ground-penetrating radar investigation at the Union Mills Homestead on March 10, 2021.

A project is now underway to further investigate subsurface remains from the tannery, to locate and map the precise location of any subsurface resources so that they can be interpreted and better understood. On March 10, 2021 a team of experts conducted a ground-penetrating radar analysis at the site. The analysis involves a geophysical technique using high frequency magnetic pulses to probe the ground.

Although we are still awaiting a formal report, the preliminary results are exciting! The early results indicate substantial archaeological resources, including building foundations, tanning vats, and piping used to circulate tanning liquors between the vats. Some additional, limited archaeological investigation is planned to further evaluate these underground items. We hope to have some more news to share later this year!

Event:  “Industrial Archaeology: Revisiting the Founding Era” (online event)
Date:  April 29, 2021
Time:  7:30 p.m.
Description:  Join moderator, Judge Joe Getty, as he leads a history panel discussion with a group including Elizabeth A. Comer and Rob Wanner, EAC/Archaeology, Inc.,  as they explore the role of mills, tanneries, and other industries on the local agrarian economy. Economic growth and prosperity were factors in the early history of Carroll and Maryland that triggered the motivation for independence locally and nationally. This program is sponsored in part by a grant from the Gilder Lehrman Institute of American History and the American Library Association. Hosted by Carroll County Public Library.
Event Video: https://www.facebook.com/UnionMills/videos/482570906225306
YouTube Link: https://www.youtube.com/watch?v=DVx1lFj2FC4