The Old-Fashioned Corn Roast Festival, an annual tradition at the Union Mills Homestead, returned this year after the 2020 event was canceled for the COVID-19 pandemic. This year’s event was particularly festive, marking the 50th time the event was held at the site.

The Corn Roast is patterned after picnics and frolics held at the site in times gone by. The event dates to 1969, soon after the Union Mills Homestead Foundation was formed. The Corn Roast is sponsored by the Union Mills Homestead Foundation and the Silver Run Union Mills Lions Club and serves a major fundraiser for the organizations. Absent two cancellations, the 50th anniversary of the event would have been in 2019. In 2018, severe flooding forced the event to be canceled when the area where the event is held was under water the morning of August 4, 2018. In 2020, public health measures enacted in the wake of the COVID-19 pandemic caused another cancellation. Thus 2021 turned out to be the lucky 50th year for the event. 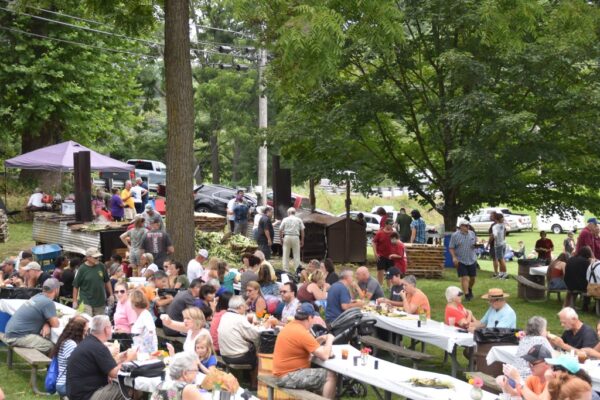 Hundreds of guests enjoyed meals of roasted corn on August 7, 2021 at the Union Mills Homestead.

Planning for the 2021 event proved challenging. Among the issues facing event planners: the untimely death of Jim Bloom, our longtime supplier of fried chicken. Bloom’s son stepped up to fry chicken for the event this year. Also a challenge: increasing cases of a new variant of COVID-19 that kept some customers away. With the event being held outside, and Maryland’s high vaccination rates, the event proceeded safely nonetheless.

Guests arrived on Saturday, August 7, 2021 at the Union Mills Homestead and enjoyed plates of fried chicken, sliced tomatoes, apple sauce, a roll, and all the roasted corn they could eat. Hundred of dozens of corn were cooked by members of the Lions Club. Approximately 1500 people enjoyed their meals in perfect weather for the event.

Evolution from Early Years of the Event 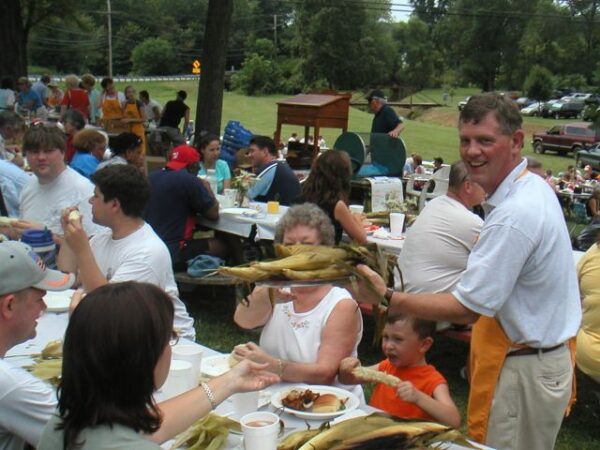 The Corn Roast is held in the tradition of nineteenth century harvest celebrations and has always centered on corn. The sides have changed over time, however. In the early years, sliced local ham from Hahn’s of Westminster was the featured meat, along with sliced tomatoes and cole slaw. Volunteers prepared the cole slaw in the kitchen of St. Mary’s UCC Church in Silver Run the week before the event. The cole slaw was an old-style sugar and vinegar-based recipe, and tomatoes were sliced to order, providing a real home-prepared meal for those coming to Corn Roast.

After a few years, the event changed from ham to freshly-barbequed chicken. It proved difficult to cook chicken quickly enough over the hot coals, so event planners switched to fried chicken which has remained a staple of the event ever since. Labor to prepare so much homemade cole slaw also proved a challenge, so apple sauce was substituted and also remains a part of the event-day platter. 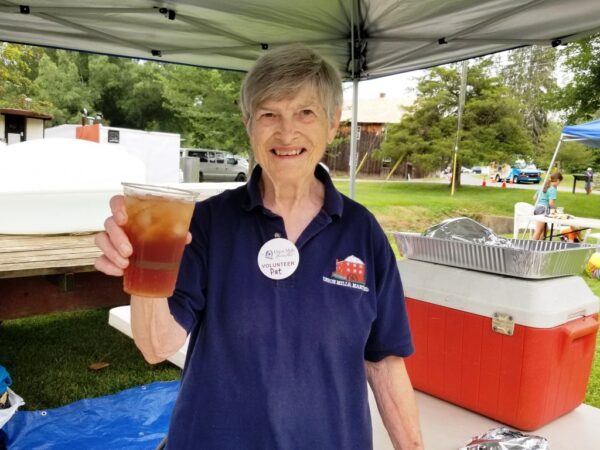 Pat Shirley, who has volunteered at all the Corn Roasts since the event’s inception, can always be found at the drink station.

Long-time volunteer Pat Shirley has been working at the Corn Roast since its inception. For many years Pat coordinated a group of volunteers who prepared homemade brewed iced tea that was served at the event. In recent years planners switched to packaged drink products which required much less work and made for easier health department approvals.

Pat has been a mainstay of the event for years and is always a welcome face at the drink station. This Corn Roast, as always, her cheerful smile greeted guests as they picked up iced tea or lemonade as they headed to enjoy their meals.

The event has always been held in the same location, near specially-constructed corn roasters along Littlestown Pike. The roasters themselves are historic, as the first two were crafted in the B.F. Shriver Co. maintenance shop under the supervision of James M. Shriver, Jr. For seating, picnic tables have been used since the beginning, although one rainy year tables had to be set up inside the grist mill due to the heavy rain! 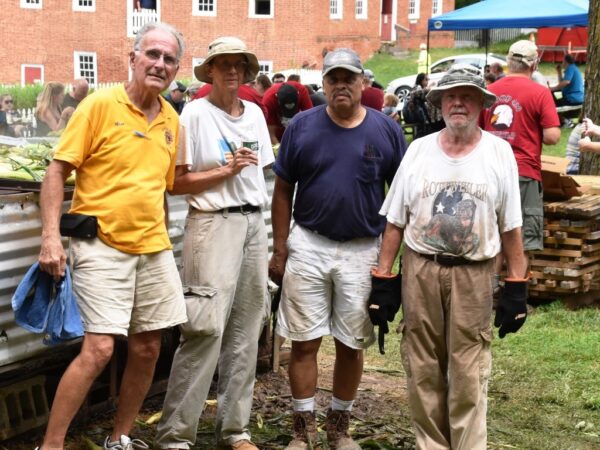 Leaders of the Silver Run-Union Mills Lions Club take a moment to pause during the 2021 Corn Roast.

From the outset the event has featured community partnerships. The Silver Run-Union Mills Lions Club has co-sponsored the event with the Union Mills Foundation since its inception. But a number of other groups have contributed to the success as well. St. Mary’s Church lent its kitchen in the early years. Local Boys Scouts troops have provided assistance on the day of the event. A number of the picnic tables used at the site were made by Boy Scouts as Eagle Scout projects. Local and State government gets involved too, as the Union Mills Homestead Park is carefully mowed each week and prepared for the event by Carroll Count Government. Crews from the State Highway Administration help prepare the banks along Route 97 by clearing weeds and other growth in the lead-up to the Corn Roast.

The 50th Corn Roast was a great success and there are so many to thank: our guests, our volunteers, staff, partners, suppliers, and supporting government agencies. Thanks so much and we hope to see you at the Corn Roast next year! Oh, and if any of you have any photos of early Corn Roasts, let us know so we can add them to our files! 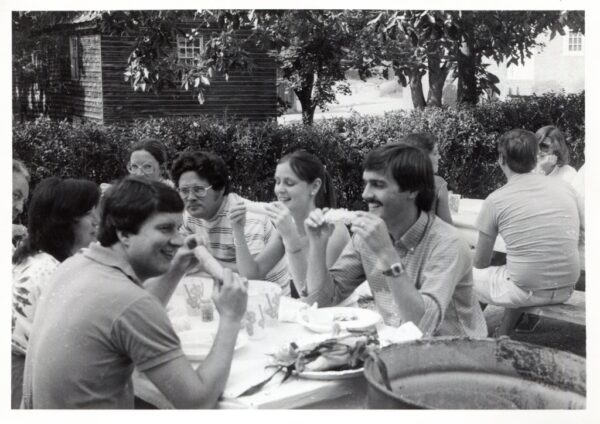 Visitors enjoying their meal at a Corn Roast in the early 1980s. (Robert Campbell Shriver photo.)