In 1869, Benjamin Franklin Shriver (known to friends and family as “Frank”) started a cannery to preserve excess crops from his father’s farming and milling business. He set up a small canning operation in the cooper’s shop adjacent to the grist mill at Union Mills, owned by his father William Shriver. From this modest shop, where B.F. Shriver began packing corn and cherries, grew one of Maryland’s largest canning businesses. By the time the firm was sold in the 1970s, it owned thousands of acres of farmland, had been in business for over a century, and left of a legacy of technological innovation. An event on Saturday, October 26 will commemorate this proud heritage. The program, to be held at the Baltimore Museum of Industry, starts at 11 a.m.

B.F. Shriver’s entry into the canning business was inspired by a family history steeped in agricultural-related industry. Shriver’s grandfather Andrew Shriver founded Union Mills in 1797 with his brother David Shriver, Jr., in a joint enterprise that featured the latest technology of its time – an automated mill. By 1869, the grist mill was owned by Andrew’s son, William. Attached to the mill was the small cooper’s shop, where barrels were made to ship flour to market.

Elaborate Letterhead of the B.F. Shriver Co. in the 1890s reflects its involvement in a variety of food processing industries.

A few years after B.F. Shriver started his canning business, he moved his cannery from the cooper’s shop to the other side of the Littlestown Pike. In 1874, B.F. Shriver brought his brother, T. Herbert Shriver, into the business as a partner as part of the company’s rapid growth. In 1881 the company expanded to a plant on Liberty Street in Westminster.

A 1919 image of the B.F. Shriver Co. factory on Railroad Avenue in Westminster.

Around 1900, the B.F. Shriver Co. moved its Westminster operations to a new location along Railroad Avenue. In 1919, the company built a new factory at the Railroad Avenue site. This new facility was built using the most modern conveyors for the processing of canned goods. The Westminster factory was one of six plants owned by the company, which provided a total capacity of over a million cases a year by the time of B.F. Shriver’s death in 1921. Adoption of the latest in technological advances helped spur the firm’s success. 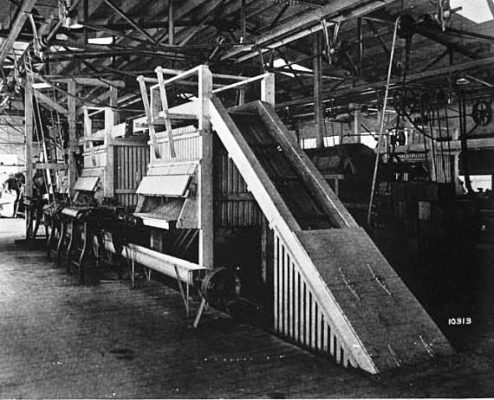 A corn conveyor in the B.F. Shriver Co.’s Westminster factory in the 1920s

Many of these technological innovations are on display at the Baltimore Museum of Industry’s canning exhibit. Among the displays: a retort, or pressure cooker, which was invented by B.F. Shriver’s brother. This invention increased the efficiency of food production and played a key part of the B.F. Shriver Co.’s growth. These innovations also brought tremendous benefits to human nutrition. Please join us on October 26 to learn more about this fascinating history and to celebrate this big anniversary!

Looking for a wedding venue? Enjoy our beautiful gardens and rustic tannery for the perfect place.Click here.