The Maryland Microbrewery Festival was held Saturday, September 28, 2019 at the Union Mills Homestead. The event, held on a hot sunny day at the historic site, closed out Carroll County Beer Week on a high note. 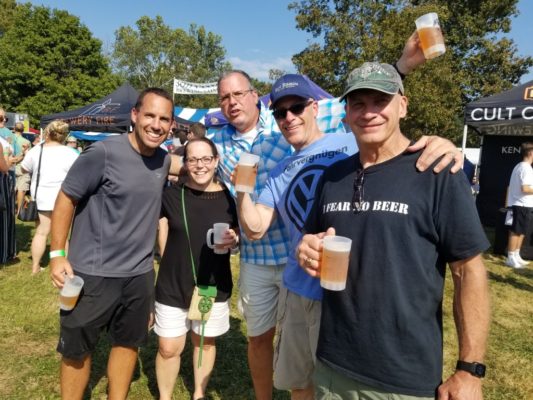 A group attending the 2019 Maryland Microbrewery Festival pose with participating brewers in the background.

The Maryland Microbrewery Festival, now in its fourteenth year, dates back to 2006 when a group of board members at the Union Mills Homestead Foundation, Inc. were looking for a new event that would bring large number of visitors to the site to both enjoy the beautiful location but also to celebrate Union Mills’ long agricultural-industrial heritage. The planners settled on a festival that would celebrate and promote Maryland’s growing microbreweries. At the time, Carroll County only had one brewer of craft beer. 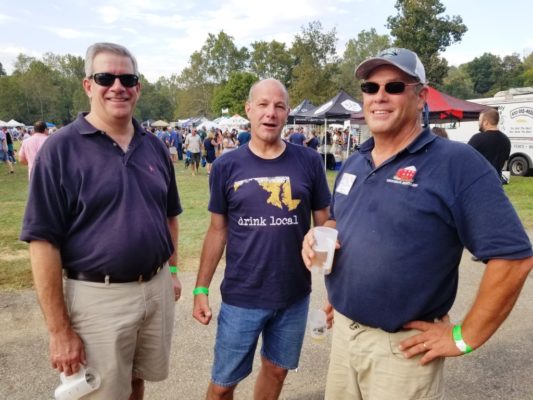 In the early years, only a handful of craft brewers participated. But the events were successful and the Maryland Microbrewery Festival grew in popularity. Each year the event features live music and a variety of food and craft vendors. Participating vendors include the Union Mills Homestead’s own Reb Staup, our blacksmith. Attendance has grown as the event has become more established, and each year more brewers come out to showcase their beers. In 2019, twenty breweries participated.

In 2015, participating brewers and a group of local restaurants joined with the Union Mills Homestead to start “Carroll County Beer Week” in the week leading up to the Maryland Microbrewery Festival. The Beer Week promotion was intended to further promote and celebrate local craft beer. This year, events were held each night of the week of September 23-28, 2019, including events at four Carroll County craft brewers. A kick-off event at Maggie’s in Westminster featured a panel discussion lead by Chris Sands, creator of the UnCapped podcast.

The 2019 Maryland Microbrewery Festival was a big success. Although held on an unusually hot day, the event was well attended, with large numbers of young families and groups that came out to sample Maryland craft beer and enjoy the site. Featuring a product — craft beer — that is made with important agricultural products, like wheat, rye, barley, and hops, event planners were pleased to bring out large crowds and to celebrate the site’s proud heritage of ag industry. The date is already set for next year (Saturday, September 26, 2020), so be sure to mark your calendar now and join us then!

Looking for a wedding venue? Enjoy our beautiful gardens and rustic tannery for the perfect place.Click here.