(Photo above: Stone Arch Bridge over Big Pipe Creek in Union Mills, circa 1890. The bridge was built 1807-08 and remained in use until washing out in a 1933 storm. Photo by Louis Shriver.)

If you have even been to Union Mills, you have driven the route of the historic Baltimore-Reisterstown Turnpike. The road, with important ties to Union Mills, played a significant part in the early economic growth of the State of Maryland and the surrounding region during the formative years of the United States. 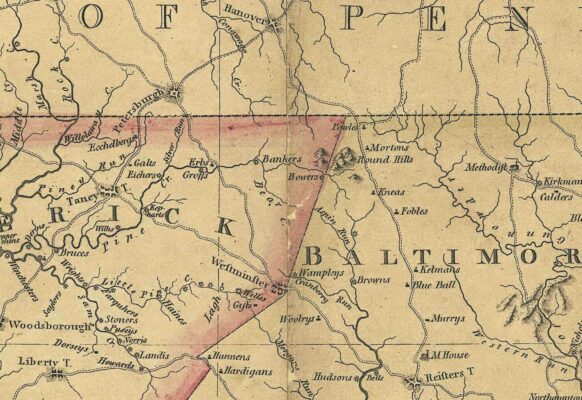 A portion of Dennis Griffith’s 1794 map of the State of Maryland, depicting early roads in the Westminster area. The map shows that the road to Petersburgh (Littlestown) in that era was west of Banker’s Mill where Union Mills was later built. (Library of Congress)

The Baltimore-Reisterstown Turnpike was one of the first highways of its time. Maryland roads at the close of the 1700s were often little more than trails, many established by Native Americans. Early residents along the Maryland-Pennsylvania border lobbied for improved roads connecting their communities to Baltimore. Thus, Maryland’s General Assembly passed an act in January, 1805 authorizing incorporation of three companies to build turnpikes, roads we now know as Old Frederick (Route 144), Reisterstown, and York Roads. These roads connected Maryland’s northern Piedmont to Baltimore’s port.

The Baltimore and Reisterstown Turnpike Company was incorporated “for making a turnpike road from Baltimore, through Reister’s-town, to the Pennsylvania line towards Hanover-town, and through Westminster to the Pennsylvania line towards Petersburgh [now Littlestown].” Funded with private capital, by 1807 road construction was progressing rapidly. The road was built with the latest in engineering of the  time, using a 12 inch base of pounded stone. Turnpikes were toll roads with a gate (“turnpike”) where tolls were paid by travelers, providing the income for the turnpike company that owned the road.

Charles Varle’s 1808 map of Frederick and Washington Counties. This portion of the map shows the roads in the area around Union Mills, including the new turnpike road and a new road to Hanover, intersecting at Andrew Shriver’s mill. Highlighted is an older road to the west of the turnpike. The highlighted road was abandoned and no longer exists. (Maryland Archives)

Completed in 1810, the road forked in Reisterstown with one branch (present day Route 30) routed towards Hanover and the other section connecting to Westminster and Littlestown. The authorizing legislation directed that the turnpikes “shall be made in, over and upon, the beds of the present roads” along the prescribed path unless there was a savings from using another route.  The route north of Westminster was one example of a change from existing roads. This was no accident as Union Mills’ founders worked hard to ensure the road came through their property. Andrew Shriver lobbied for road construction through the Union Mills property, which eventually became an important crossroads settlement. One of the Shriver brothers, David Shriver, Jr., became the superintendent of construction for the Baltimore-Reisterstown Turnpike. The road eventually connected to turnpikes in Pennsylvania providing a transportation link to Pittsburgh.  As a result, regular stage coach traffic and loaded Conestoga wagons clogged the road on a daily basis.

The new turnpike was one of the best roads in the country, connecting busy outlying mills to Baltimore, encouraging the region’s economic growth. One mill that benefited: Union Mills, which prospered from the turnpike’s route past the mill’s front door on the road’s leg north of Westminster. After the road was built, it provided a direct link from Union Mills to the Port of Baltimore, where barrels of flour were an important commodity in the international flour trade. Traffic along the road spurred the growth of businesses along its route, including a tavern and inn operated by Andrew Shriver at Union Mills.

Milestones marked distance along the turnpike’s route. The authorizing legislation specified that the companies were to “cause milestones to be placed at the side of the said road or roads, beginning at the distance of one mile from the bounds of the city of Baltimore, and extending thence to the termination of each or either of the said respective roads, whereon shall be marked, in plain legible characters, the respective number of miles which each stone is distant from the city of Baltimore….” One particularly well-preserved milestone near the Westminster Airport is still visible along the highway’s route. The stone marks the distance from Baltimore, bearing the inscription “31 M TO B.”

From Privately-Owned Turnpike to U.S. Highway

The Baltimore-Reisterstown Turnpike remained a toll road for over a century, until it was finally purchased by the State of Maryland in 1915. From 1926 to 1979, Reisterstown Road and the sections of the road through Westminster and Union Mills were a U.S. highway. Now a state road, portions of the Baltimore-Reisterstown Turnpike have been bypassed by new highways like Route 795 and the four-lane portion of Route 140. But Route 97 north of Westminster, a major regional thoroughfare, still follows the turnpike’s original route. The heavy traffic along Littlestown Pike through Union Mills is a testament to the success of the road as a major connector between Baltimore and points westward.

Program: “The Road Most Traveled”

The Baltimore-Reisterstown Turnpike will be the subject of an upcoming online program sponsored by the Historical Society of Carroll County.