With the COVID-19 pandemic of 2020 forcing cancellation of the Union Mills Homestead’s Flower and Plant Market for the first time in 51 years, we are reminded of a similar health crisis in 1918. That year, a wartime influenza epidemic ricocheted around the globe before finding its way to the far reaches of rural Carroll County. The 1918 flu outbreak took a heavy toll in the area.

Baltimore newspapers reported influenza in Germany in June and July, 1918, followed by an outbreak in Boston the last week of August. In September, the papers described the disease’s spread elsewhere in the United States, with symptoms that included chills, high fever, headache, backache, reddening of the eyes and “general prostration.” But as late as September 20, 1918 the Baltimore Sun reported there were no cases of the disease in Baltimore as of that date.

This reassuring news changed quickly. There were reports on September 24 of 150 sick soldiers from Baltimore-area Army installations being taken to the military hospital at Ft. McHenry. The next day, the Baltimore Sun reported there were 500 cases of influenza at Camp Meade.

As the disease swept the country, papers reported that a general outbreak of disease was not imminent in Maryland. In early October, 1918, as news cases and deaths from flu and pneumonia grew, the Baltimore Sun reported the City’s health commissioner was considering “drastic action” but noted the disease was not as serious in Baltimore as it was at military installations around the state. On October 2, 1918, The Sun reported 177 new flu cases and six deaths in Baltimore City but 1,590 new cases and ten deaths at Camp Meade. As a precaution, public dances were banned. Street cars and moving picture houses were to be “thoroughly ventilated.”

According to the Sun, as of October 2, 1918, Carroll County led the outlying counties with 48 new cases of flu. But on October 4, the Democratic Advocate reported that Carroll County’s Board of Health advised that the “Spanish Flu” was “NOT a new disease, just old-fashioned grip.” (sic) Further, the paper noted, “the State Board of Health has not deemed it necessary to close our schools.” The dispatch from Union Mills that same date in the Carroll County Times was promising, reporting that “the Spanish Flu has not yet reached our village.”

The good news did not last long. On October 3, the Sun reported the flu was epidemic, although the Baltimore City Health Commissioner still urged against “undue alarm” and later that week resisted any major shutdowns.

On October 11, however, the Sun reported 2,853 new influenza cases and 114 deaths in Baltimore City. Also reported: the Baltimore City Health Commissioner’s “order closing the churches, Sunday-schools, synagogues and other places of public worship and assembly; and also all pool houses, billiard rooms, and bagatelle rooms.” Parades also were banned. Interestingly, saloons were not included in the ban, as “whisky if properly used, is considered an effective remedy in cases of influenza.”

In Carroll County, the Democratic Advocate reported that schools and public places of amusement in Manchester were ordered to close as of October 8, 1918 for an indefinite period due to the influenza epidemic. Most other local towns also reported similar closures of schools and churches. The same edition (October 11, 1918) noted that hospitals in the nation’s capital were filled to capacity. 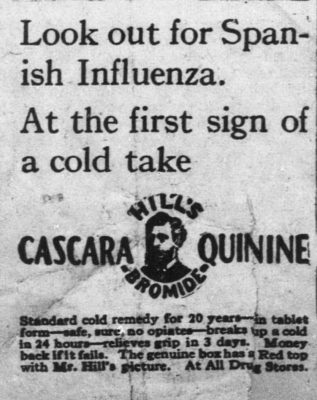 The Democratic Advocate relayed Government reports that “while there is no reason for any great alarm or panic about the matter, it is important for everyone to exercise unusual care as to health and all should aid in every possible way to prevent the spread of the epidemic.” But losses from the disease continued, with Carroll County newspapers running regular death notices related to influenza through the month of October, 1918.

By late October, 1918, surrounding jurisdictions were considering whether to lift “flu bans” – orders prohibiting public assembly. On October 29, the Sun reported that Baltimore County Schools reopened “after being closed on account of the influenza epidemic, and will remain open.”

On October 25, 1918, the Democratic Advocate reported that the ban on church services was lifted in some parts of Carroll County. A quarantine at Western Maryland College was also lifted. 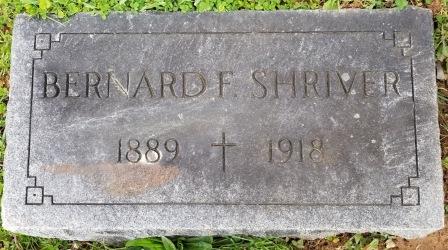 The epidemic seemed to just be reaching the area around Union Mills, however. On October 25, 1918, local papers reported a death in the Shriver family the day before. Bernard F. Shriver, just 29 years of age and one of B.F. Shriver’s two sons, worked as a manager for the B.F. Shriver Co.’s farming and canning operations. He had recently taken ill and died the morning of October 24 at Avalon, across the road from the Shriver Homestead. Due to restrictions on public assembly, no church service was allowed. Instead funeral arrangements involved a small service at the family home and burial at St. John Catholic Cemetery in Westminster.

The papers continued to report a number of flu cases in the Union Mills and Silver Run area in the last week of October. The Times reported on November 1 that “Marian Shriver, who was very ill at the time of her brother’s death, is convalescing.” The papers also announced the tragic deaths of three members of one local family. The Times reported the death of Paul Strevig, who had been caring for his brother James who was buried the previous week. Paul Strevig was 28 years of age and a member of the I.O.M. Lodge of Union Mills. His nephew George Strevig, age 17, also died that week.

Although life started returning to normal in November in some parts of Carroll County, school closures continued in the district around Union Mills through the first weeks of November. Flu deaths continued on into the early months of 1919. In hindsight, what happened in 1918 is not too different to what we are experiencing in 2020, with the exception of the 1918 disease’s spread through the general population and heavy toll on young adults in the community.

For more information on the 1918 epidemic:

Eleanor S. Darcy, “A Pandemic Hits Home: When Carroll County was in the Grip of the Spanish Flu,” Carroll History Journal, Fall 2015.